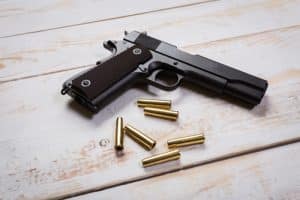 Unlawful firearm discharge indoors is a Class 4 or 6 felony in Virginia (depending on whether malice is involved), respectively carrying up to ten and five years in prison. As a Fairfax criminal lawyer, I know that Virginia — compared to other states — has particularly favorable laws for possessing and carrying handguns/firearms. Nonetheless, that does not mean that the Virginia law tolerates unsafe use of firearms. Consequently, Virginia criminal law prohibits the following:

Fairfax criminal lawyer on accidental indoor discharge of a firearm

Even though I believe in a Second Amendment with teeth — both because defanging any part of the Constitution can defang the rest and because we need a counterbalance to the existing harsh handgun laws — I of course urge safety with all weapons. I do not deny that it can feel freaky to walk or drive down the road in Virginia knowing that so many people might be armed, and can even openly carry handguns in holsters. As much as the National Rifle Association (NRA) — which is only two miles from my office — is receiving more criticism than ever, firearm users are wise to consider NRA and local gun shops as one of their resources for assuring safety in firearm possession and use.