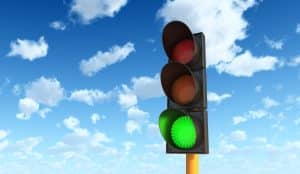 Violating a green light can happen all the more with the legions of drivers who cannot unglue themselves from text messaging and emailing at red lights (and beyond, unfortunately). How many times do we find ourselves giving a nudging honk to the car in front of us that remains motionless at a traffic light that has turned green?

The difference between reasonable suspicion to stop a motor vehicle, and proof beyond a reasonable doubt to convict

The Virginia Code provides that: “Green indicates the traffic shall move in the direction of the signal and remain in motion as long as the green signal is given, except that such traffic shall yield to other vehicles and pedestrians lawfully within the intersection.” Va. Code § 46.2-833. That would sound like a permissive legal provision rather than a penalty for violating a green light for a few seconds.

Unfortunately, the Virginia Supreme Court’s 2016 Mason v. Commonwealth decision that allows police to make a reasonable suspicion stop a car for any object dangling from a rearview mirror (even if not obstructing one’s view) is used by the Virginia Court of Appeals in Joyce to green light police stops for a six-second green light violating delay even if it turns out that the delay was for such a good reason as a deer or goose crossing in front of the driver.

Will a green light violating delay less than six seconds permit a traffic stop in Virginia?

Particularly concerning about Joyce is that the stopping police officer’s estimate of Joyce’s violating the green light for 6-7 seconds could have been overstated and even less than six seconds, because very few people have a good internal clock for such a short number of seconds.

When a light turns green, we still want to make sure that nobody is blowing the red light for people coming from our left or right. We want to make sure that the car approaching from the opposite direction — whether signaling or not — is not going to be violating our right of way by turning left in front of us. Consequently, Joyce cannot be making a bright-line six-second rule, rather than necessitating looking at the totality of the circumstances for whether the driver is taking too long to proceed through a green light. Stopping a vehicle for only waiting that short a time at a green light sounds like too much of a police hair trigger under the Fourth Amendment.

Fairfax criminal lawyer pursuing your best defense against felony, misdemeanor, and DWI prosecutions. For a free confidential consultation with Jon Katz about your court-pending criminal or DUI case, please call us at 703-383-1100.