Courthouse Neutrality is Essential for Virginia DUI and Criminal Defendants 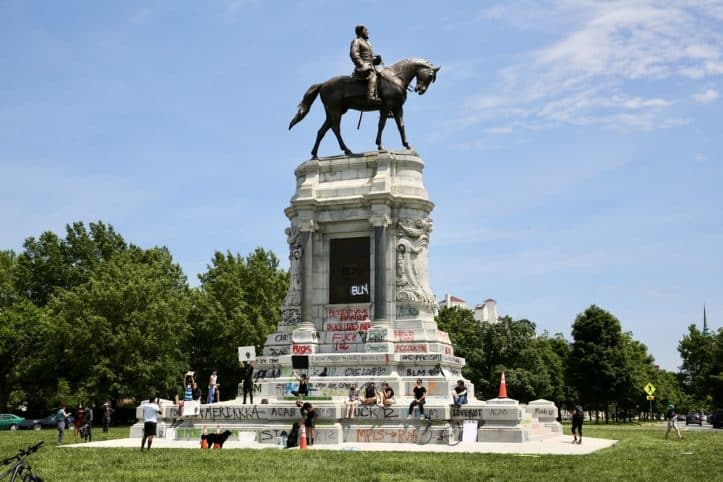 Courthouse neutrality in imagery is critical to a fair trial for Virginia DUI and criminal defendants. As a Fairfax criminal lawyer, I am delighted that the one Northern Virginia courthouse finally removed a decades-long confederate soldier statue on its grounds, a rural courthouse finally removed a large full-length portrait of Robert E. Lee from its Circuit Courtroom, and the Fairfax historical courthouse grounds removed a cannon(s) pointed north, the direction where all confederate cannon monuments apparently point. I regret that numerous farther away Virginia courthouses still include sometimes huge monuments honoring confederate soldiers and still list war veterans according to “colored” and non-colored. Beyond giving the wrong messages to jurors about race, courthouses should not either give messages to jurors that police are superior to other witnesses, which can happen by allowing them to be armed as witnesses in the courthouse, and when deputy sheriffs are both the county’s only law enforcement branch and the courthouse security team. Furthermore, what message goes to jurors when they see prosecutor offices in all but one Northern Virginia courthouse (but no public defender office in the courthouse), and prosecutor portraits prominently displayed in courthouse hallways and other public areas?

What message gets sent to jurors when the the walls lack courthouse neutrality and are adorned with portraits of only white former judges?

Praised be Fairfax County Circuit Court Judge David Bernhard for last year striking a blow for courthouse neutrality by declining to have portraits of judges — just about all (if not all) white and mostly male — hanging in courtrooms during his jury trials. The next step should be to look at the portraits and photos in all courthouse common areas, including those of courthouse clerks who presided during the most virulent times of Jim Crow and racial segregation, and prosecutors (particularly if the prosecutors worked to enforce racist laws and actions).

Yes we need to choose our battles wisely, and I probably do more for Virginia criminal defendants by fighting for them in court than to work to achieve courthouse neutrality with imagery. However, one activity does not preclude the other. Now that confederate statutes are being pulled beyond courthouse grounds in Virginia, I recently gleefully noticed all the more the seeming removal of a portrait that always bothered me in the Arlington County, Virginia, courthouse law library, only to learn that it had been relocated to a different wall in the same library. This is a portrait of William Joseph Hassan, the 1952-74 chief prosecutor for the county.

How many Virginia prosecutors did not favor Jim Crow but still enforced it? Hassan worked to enforce it.

Hassan did not merely preside as chief prosecutor during still-virulent statutorily-sanctioned racism in Virginia, but also was involved in enforcing it. For instance “In the 1960s, [county court substitute judge Ken McFarlane Smith ] decided a case that invalidated Virginia’s required racial segregation in movie theaters, a case that was argued by Hassan for the county [supporting the racial segregation laws] and legendary labor lawyer Joe Rauh for the defense.”  Related to that, in federal court in 1963, William Hassan unsuccessfully defended himself in a multi-defendant case against enforcing racial segregation in movie theaters. Blackwell v. Harrison, 221 F. Supp. 651 (E.D. Va. 1963). In the early 1960’s, William Hassan was among the lawyers representing defendant Virginia government, in a successful lawsuit against maintaining racially segregated government records. Hamm v. Virginia, 230 F. Supp. 156 (E.D. Va. 1964).

With scores of counties in Virginia, I do not know all of the courthouse imagery meriting removal. Please leave a comment here or an email to me about courthouse  and court grounds imagery that needs removal.