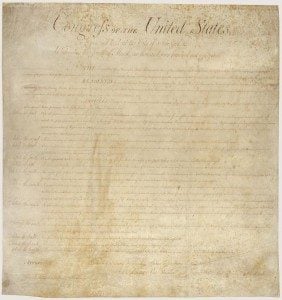 Crowd limits in restaurants and other leisure venues started in the nation’s capital and state to the north recently, in response to the coronavirus, and  yesterday sadly came to Virginia. As a Fairfax criminal lawyer, I am saddened to see not only that the commonwealth’s governor on March 17, 2020, ordered a ten-person crowd limit for restaurants, theaters, and fitness centers, but that his order references it being a Class 1 misdemeanor for a violation under Va. Code § 32.1-27 and a Class 3 misdemeanor for violating § 35.1-7, in relation to the governor’s order. Will the Virginia limits stop there, or extend to additional venues, and add curfews and staying at home under penalty of prosecution? Earlier this month I was hoping that quarantines would be the worst test of our Constitution.

Before the coronavirus struck, we already lived in an overly-policed state. Civil liberties-limiting orders on crowd limits and other activities by gubernatorial fiat — worse when not resulting from involvement with separation of powers / legislative participation — risk an even further entrenched police state that is not automatically going to get reversed when the coronavirus subsides.

Caselaw is limited about police power on crowd limits and other human activities during health epidemics, thus emboldening police and government all the more to enforce gubernatorial dictates during health crises. See Gibbons v. Ogden, 9 Wheat 203 (1824); Norfolk v. Com., 93 Va. 749 (1896) (discussing Gibbons).  To be sure, people should take personal responsibility to help the greater community during such crises, but we already know that government is so dysfunctional during times without severe crises, that government is at the risk of being all the more dysfunctional when a crisis exists, when haste makes all the more waste.

We already know that some of the worst civil liberties violations come from well meaning people during times of crises, and that today’s limits on civil liberties regarding crowd limits and other activities, and threats of criminal prosecution for not adhering to those limitations may be used as precedents for officials in the future to justifying excessive criminal enforcement and limits on our civil liberties.

Courts should act independently of the governor in adjudicating criminal litigation

Virginia Supreme Court Chief Justice Donald W. Lemons’s declaration of a judicial emergency extensively references the governor’s actions on crowd limits and public activities, and requests without mentioning separation of powers among the branches of government. The Chief Justice’s emergency declaration, for instance, states that the governor “announced a statewide ban on all events over 100 people. In light of the foregoing and the Chief Justice having received … a request from the Governor for a declaration of a judicial emergency…,  this Order declaring a judicial emergency is hereby issued for all [Virginia courts.]” In the best of all worlds, our leaders will afford the electorate notice and comment periods for the public to make suggestions and express opposition on proposed and announced limits on our liberty during this and other times of crisis.