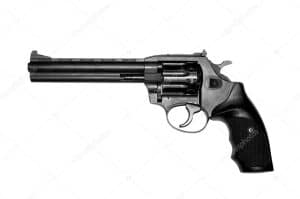 Handgun convictions are available without recovery nor testing of the weapon, says Fairfax criminal lawyer

Handgun convictions in Virginia do not automatically require the recovery nor testing of the weapon. As a Fairfax criminal defense attorney, I know that a Virginia firearms offense conviction requires proof that the item is “any instrument designed, made, and intended to fire or expel a projectile by means of an explosion” ( Jordan v. Virginia, 286 Va. 153, 157 (2013)), that a replica gun or BB gun do not qualify as firearms (Jordan), and that the alleged handgun does not have to be recovered in order to obtain a conviction. Wimbush v. Virginia, Record No. 0723-18-3 (July 9, 2019) (unpublished).

Proving firearms possession can be accomplished by the surrounding circumstances rather than recovery of the firearm itself, underlines Fairfax criminal attorney

Wimbush got convicted for being a felon in possession of a firearm, where a neighbor heard gunshots and saw someone with a revolver, police soon after found a nearby shot-out vehicle with money strewn next to it, another neighbor saw Wimbush being handed what looked like a cloth-wrapped handgun, the same neighbor next saw Wimbush peering out from behind his shed, and Wimbush (shortly after arrest) made two recorded jail phone calls around an hour apart, suggesting he was trying to get rid of a handgun hidden at the property of the man who saw the cloth-wrapped gun, with the other party to the second phone call confirming he had already gotten/recovered “the jammy” . Wimbush. The Virginia Court of Appeals found the foregoing evidence sufficient to convict.

Handgun convictions for convicted felons means a Virginia Class 6 felony conviction. This prohibition extends beyond a handgun / firearm alone, to state that a convicted felon may not “knowingly and intentionally possess or transport any firearm or ammunition for a firearm, any stun weapon [unless possessed in his or her residence] as defined by § 18.2-308.1, or any explosive material, or to knowingly and intentionally carry about his person, hidden from common observation, any weapon described in subsection A of § 18.2-308.” Va. Code § 18.2-308.2.