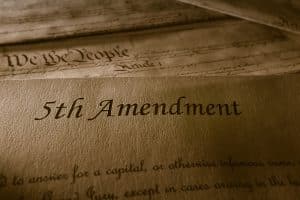 Immunity law needs to be considered by any trial witness wishing to assert the Fifth Amendment right to remain silent. As a Fairfax criminal lawyer, I have experienced several case dismissals for assault cases where the complaining witness hires a lawyer who tells the prosecutor (1) the complainant wants a case dismissal and (2) the complainant will assert his or her Fifth Amendment right to remain silent if called to the witness stand.

Kastigar addresses the federal immunity statute, for which Virginia has no parallel. 18 U.S.C. § 6002.

Gosling affirmed the defendant’s conviction where the trial court refused to compel the testimony of a defense witness who mid-testimony asserted his Fifth Amendment right to remain silent. Gosling’s key pronouncement is:

“Although this concept of coextensive immunity does not require absolute immunity from prosecution before testimony may be compelled, the witness must be provided nothing less than the protection guaranteed by the constitutional privilege. Use immunity, derivative use immunity and transactional immunity are species of immunity that have developed as government has attempted to balance constitutional safeguards with the needs of sound public policy.” Gosling.

Immunity caselaw is complex and calls for lawyers to be ready to argue the applicable law and for trial judges to listen to those arguments before ruling.

Fairfax criminal lawyer Jonathan L. Katz addresses Fifth Amendment and all other relevant Bill of Rights issues for his clients prosecuted for alleged felony, misdemeanor and DUI offenses. To discuss your case with Jon katz, please call his staff at 703-383-1100 to schedule a confidential consultation.