Skip to content
VIRGINIA CRIMINAL LAWYER • BEAT THE PROSECUTION
703-383-1100 • jonathan@katzjustice.com • Se Habla Español • On Parle Français
Home » Blog » Jon's news & views » Joseph Katz passes- Taught me never to give up nor give in 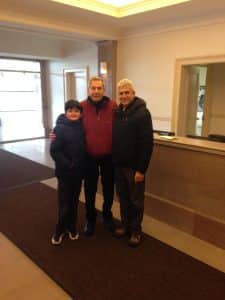 My dad Joseph Jacob Katz passed away May 18, 2020. I could say he had a long illness, and that I am happy I got a chance to visit with him for many nice  hours at my parents’ home in New York City this past weekend, all of which is true. Here, I talk, briefly, about how my father lived.

My father grew up in West Hartford, Connecticut, up the road a few dozen miles from where I grew up, and where plenty of people speak with non-rhotic accents, but not my dad. Senator Tom Dodd recommended him for West Point, where he graduated in 1958, and where he loved taking my brothers, mom and me for numerous football games and reunions. He saw the military as needed but of course as needing to be deployed only at the right times and for the right reasons. He loved Patton, took me to see it soon after it came out, and got a chance to bump into George C. Scott at a Broadway theater and tell him how much his Patton character meant to him.

My father urged me not myself to attend West Point. He already knew how much of an individualist that I was my entire life, and told me that would be a real impediment. It is a good thing that I did not enter the military, because I became mainly pacifist-leaning, while believing in the need for an effective military, and believing that too often the government has sent in the military with hair-trigger and severely misguided policies and decisions. My dad’s military background positively inspired me in terms of being disciplined in achieving goals, pursuing t’ai chi ch’uan, and in treating trials and litigation as the battles that they are.

My parents settled in Fairfield, Connecticut — thankfully not far from Manhattan, because the town’s beauty and seaside location still did not make it an exciting place for me — where my father in neighboring Bridgeport continued his career in life and health insurance brokerage. I worked for him for a few summer weeks while in college, and marveled firsthand at his persuasion skills, which were about helping people, tailoring products to their needs and goals, and not presenting a hard sell. That carries on with me through persuading as a lawyer, knowing that pushiness achieves nothing, and listening with and acting on all senses accomplishes much.

Of course, not being pushy does not preclude accomplishment through aggressiveness. As the New York Times underlined in 1976: “Joe Katz, who sells life insurance the same way he plays tennis — aggressively — could not have been happier if he’d just put away a tricky overhead for matchpoint. ‘I did it, I did it,’ he shouted.”

My dad exercised almost daily. Golf yielded to tennis in the 1970’s, and then he added biking and running, and later returned to golf and continued biking. I joined him for some long distance runs soon before starting high school. When high school started, he suggested I check out the cross country running team. I responded that I had only started running. He nudged me to talk to the coach nonetheless. What a great experience that became, running more miles and higher hills for cross country practices as the weeks progressed, being urged by teammates never to stop on a hill and to gut it out.

My dad was Yoda‘s precursor for me. There is do or do not. Never give up nor give in. I never saw him quit anything.

My father encouraged us on the paths my brothers and I sought. When I was performing amateur magic shows for birthday parties, he took us to a star-studded magic spectacular at the Felt Forum, and along with my mom took me to Manhattan’s Louis Tannen’s magic shop to experience the magic of those gathered there as much as the great products that Tannen’s sold. When I interviewed at Wall Street’s Irving Trust Company, he got the lowdown on the company for me, where I worked for a year after college. He encouraged me in my law career, during law school, then when I joined a corporate law firm for two years, and in my criminal defense career. He got a kick out of my stories about Gerry Spence and the Trial Lawyers College that he spearheaded.

When I told my father 25 years ago of my decision soon to open my own law firm, he asked me my plan for getting clients. I jested that I would mount a blowup of his West Point graduation photo to a board, and do the same with Karl Marx’s photo on the other side, and that who was visiting me as a potential client would determine which of the two images they would see hanging in my office. I never needed to follow up with that notion.

My parents moved to New York City several years ago. I spent many nice hours with them this past weekend at their home. My father will be interred at the military cemetery at West Point at the appropriate time when we get farther away from the pandemic. No charity has been designated, rather than donating for feeding those in need.

Deeply thanking and bowing to my dad, and hugging him.