Gerry Spence Wins Trials by Embracing & Revealing His Entire Self 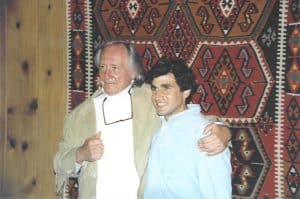 For the entire month of August 1995, I was in Wyoming at the then one-year-old Trial Lawyers College, at Gerry’s beautiful Wyoming Thunderhead ranch ten miles away from the nearest paved road. I applied after hearing the college promoted by my key trial teacher Steve Rench. Apparently only a small minority of applicants were accepted, and I was among them.

My decision to attend the Trial Lawyers College was right on the money. My learning and growth diminished the times that were so unplanned that one afternoon we found ourselves cross-examining nursery rhyme characters. Then again, great trial lawyering includes improvisation among all the preparation and practice.

I have said my piece about how much better the Trial Lawyers College — which has some cult hallmarks without being a cult — would be if it were not so heavily institutionalized by now, and so inextricably intertwined with Gerry Spence (on video here and here), who with Steve Rench and others was at the college virtually daily, Monday through Friday. For me, I will take what works and leave the rest.

Gerry, who declared his Jeffrey Feiger acquittal as his last trial, continues to be a fascinating and essential person for me to learn from, for the very reason that he goes through life embracing all of what makes up himself, life and the world itself. That is how he can amazingly connect with jurors in any part of the nation, and how he can connect with many judges, and respond to those who berate him.

A key part of persuading people is being fully real and honest with them; not self centered, but honest. Early on in trials, Gerry reveals his concerns with jurors, which both enables them to identify with and listen to him, and for him to shed the weight of those concerns. Gerry goes for full and total persuasion at every turn, not for an Academy award in oration.

Only days after I finished the 1995 Trial Lawyers College, Thomas Heath published this entirely revealing portrayal of Gerry, which has been worthy of my occasional re-reading. Heath’s article portrays a man thirsting for success, already wildly successful in the courtroom and financially, yet plagued with fears and other insecurity.

When I attended the Trial Lawyers College, bonds were established among the attendees in extraordinary ways that are uncommon in daily life, through trusting and (most of us) fully revealing ourselves to each other. Those powerful bonds continue many years later among me and numerous TLC attendees from the year I attended and with various subsequent attendees. The most successful attendee at the TLC is the one who wants to become a better person and better trial lawyer, not who seeks more money.

Gerry was both blessed and challenged that he started practicing law in the 1950’s, before quality trial lawyers seminars and trial lawyers books were as plentiful as they now are. He had to blaze his own trail in many ways, with some of his key teachers coming from psychology rather than the law, including psychodramatists and the lessons he learned from such writers as Carl Rogers and Paul Tillich. He also learned plenty with his former (late) law partner Robert Rose, and his wife of decades Imaging.

Gerry was blessed by having to blaze his own trail, because that is the way we best spread our wings. He has been challenged in doing so, because that path includes many hits and misses.

Gerry constantly inspires me with his example of ultimately believing in his abilities, and backing that up with devoted preparation and presentation.

Virginia criminal lawyer Jon Katz approaches each client’s case as a new and unique challenge, and never as a cookie-cutter exercise. To discuss your case with Jon, please call his staff at 703-383-1100.