The essence of Thich Nhat Hanh: Peace – compassion, and happiness 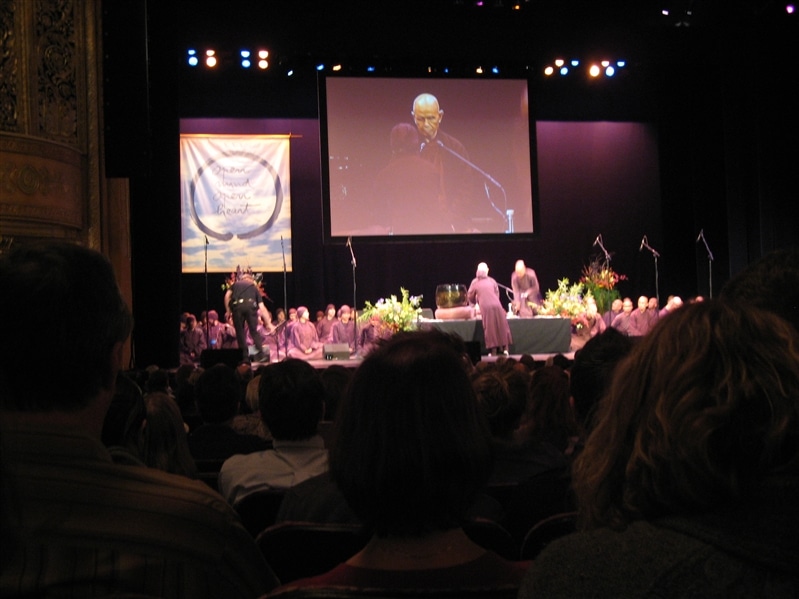 The most godlike person I have ever seen or heard. Copyright Younghee Katz. 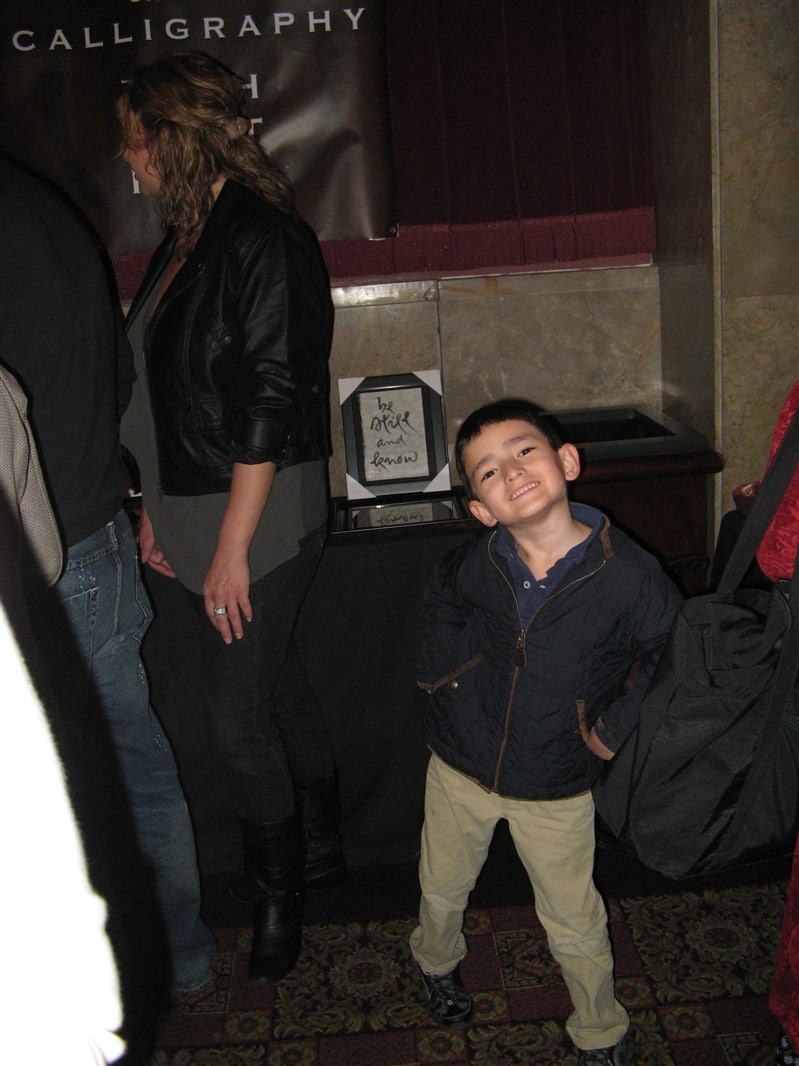 My son in front of a Thich Nhat Hant calligraphy saying "Be still and know." Copyright Younghee Katz.

Last Tuesday night, my wife, son and I joined a sold-out audience to experience Thich Nhat Hanh at the Warner Theater in Washington, D.C. I was primarily going so as to better understand the essence of this man whose words and being have tremendously helped me overcome my previous utter fear of my own death, for instance through his book No Death, No Fear. I got much more than that, including being in the presence of someone more godlike than I had ever experienced.

Having our five-year-old boy with us, I did not experience the entire evening uninterrupted; we played outside for a good while as a break. What I did experience was transforming on my ongoing path of powerful peacefulness and compassion, a path that I too often have faltered from to this day. The evening began with one of the nuns leading the audience in breathing exercises, focusing on our in and out breath to achieve greater well being and happiness.

Next, Thich Nhat Hanh (also known as Thay) entered to a standing welcome. He is eighty-five. T’ai chi master Ben Lo is close to that age, as is one of my earliest lawyer mentors, Irv Margulies. Thay spoke of the gathering as a dharma talk, and the meaning of that. A few minutes later, he talked about the upcoming chant of the name of Avalokite, the bhodisattva of compassion, who wrote the Heart Sutra (see here, too). He spoke about the suffering that everyone experiences, including the nuns and monks who would be doing the chant. Then they did the chant, with Thay blessing the audience with his hand movements. I was blown away at the total focus and passion the nuns, monks and Thay had during this chant. Their entire being was on the chant, which was tremendously more moving live than in this video that is also depicted in my last blog entry (my blog software no longer easily accommodates simultaneous text with YouTube visuals).

The main message I got from Thich Nhat Hanh — beyond the message of the total peace and happiness that he represents — is that everyone experiences suffering; we need to show everyone compassion; we need to find happiness; we need to find uncluttered quiet; and a very important thing that we can do for ourselves and others is to be totally present in the now with them (therefore, not thinking of the past or future, and not checking our cellphones). Related to this are his essential messages of mindfulness and interbeing.

Thay spoke of watering the seeds of anger and of happiness. He spoke of death as being artificial just as when the cloud disappears from view, it is not gone forever; the tea in his cup contained water that was once part of a cloud, but was now essence in another form.

Thay has written in No Death, No Fear that after one’s heart stops beating, s/he will manifest at future times. He has written that not only rape victims suffer, but that rapists also are suffering. When someone does something rotten, s/he is suffering.

On the way out, my boy saw Anh’s Anger on the book table, and asked me to buy it for him. It is a wonderful book about a boy who gets angry at his grandfather for continually telling him to interrupt his playing to eat dinner to the point of saying "I hate you!" to his grandfather. His grandfather shows mindfulness and compassion to Anh, but still sends him to his bedroom to return to harmony. Seething with anger, Anh comes face to face with a red-colored creature that represents his anger. He starts playing around and dancing with his anger, which then becomes smaller and smaller, and finally disappears. When he apologizes to his grandfather, his grandfather shows fully compassionate empathy. That is what Thich Nhat Hanh teaches.

That evening, I also experienced Sister Chan Khong, who has been with Thay for years. She also has a riveting presence.

Just like the Dalai Lama, Thich Nhat Hanh appeals to an audience well beyond Buddhists, as he addresses universal themes without asking for people to become Buddhists.