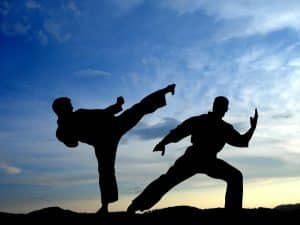 Assault trial court dates require full preparation for litigation battle. As a Fairfax criminal lawyer, I know that an assault conviction is a scarlet letter on one’s criminal record and reputation, and that any parallel protective order proceeding needs to be fully defended as well.

This week, I produced this video on Virginia assault trial defense and other Covid-19-related defenses. Such prosecutions need to be fought tooth and nail. Assault prosecutions often have no eyewitnesses other than the criminal defendant and their accuser. Police know this, and make their best efforts to obtain incriminatory information from one or both parties to an alleged assault. Police skillfully avoid needing to give Miranda rights in the process, as they frequently make sure not to arrest nor otherwise detain any suspect before hearing their full answers and description about the incident, and often couch such discussions in terms of wanting to know what really happened.

Should I speak with the police if accused of assault or another Virginia crime?

As tempting as it may be to seek to get the police on one’s side in an effort to avoid an assault protection and assault trial — and even to get the other party to the incident arrested — the often emotionally charged situation soon after an alleged assaultive situation make it all the more important to follow my repeated admonition about the dangers of relinquishing one’s Fifth Amendment rights to remain silent with police.

As you prepare for your assault trial, remember the importance of timely obtaining a qualified lawyer, and that simple assault in Virginia is a misdemeanor charge not only for an allegedly offensive and non-consensual touching, but also for allegedly intentionally putting one in fear of such an incident. Worse, a Virginia felony prosecution can result for particularly serious injuries or for an alleged strangulation.

Should I testify at my assault trial?

An assault trial often involving no witnesses other than the parties to the incident, the only way to win such a trial often is for the defendant to waive his or her Fifth Amendment right to remain silent, and to testify at trial. Preparing to testify at one’s criminal trial requires thorough preparation and practice with one’s lawyer.

During our several testimony practice meetings, I often include having my client prepare and practice his or her testimony at a gathering of people (preferably including non-lawyers) to include not only testimony practice, but also persuasive storytelling and psychodrama-related role playing and reverse role playing to have a better sense of what makes the judge and jury tick in their feelings/gut and mind during the course of the trial, their information processing, and their decisionmaking; to fully understand what happened on the incident date so as to convey the defendant’s human heart to the judge and jury; and to fully understand the perspective and testimony of the complainant, no matter how untruthful or accurate will be the complainant’s testimony.

Earlier this month, I blogged about the interplay between an assault trial and a parallel Virginia protective order proceeding, often alleging domestic violence. This week, I also videotaped this video on the subject.

Seeking a Virginia assault trial or protective order is like lighting a forest fire. Once an assault prosecution begins, the complainant does not have control over whether and when the case gets dismissed or whether the prosecutor makes a settlement offer for a lesser offense. Once a protective order is issued, it remains in effect unless and until the complainant correctly seeks judicial intervention to rescind or modify that order.

As a Fairfax criminal lawyer, I know that the one-page, two-sided recognizance document tells an arrested Virginia criminal defendant whether or not s/he may leave the commonwealth of Virginia pending his or her assault trial or other trial, and whether such pretrial release conditions are in effect as having no contact with an alleged assault victim, or to be supervised by the pretrial release authorities. If the defendant wants the recognizance amended before his or her assault trial or other trial, ideally the defendant will have a lawyer hired to seek such relief from the court.