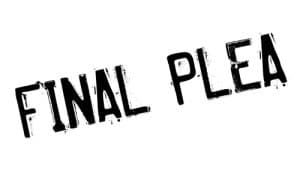 Beware pleading guilty, no contest/nolo contendere, or Alford. Doing so bypasses your Constitutional right to trial and hands the prosecutor a conviction. Consequently, as a Fairfax criminal lawyer, I know that before departing from a not guilty/innocent plea, a criminal defendant needs to have fully examined the trial avenue and negotiated from a position of strength, preferably at all times by being fully ready for trial.

Of course, as a Fairfax criminal lawyer, I know that many instances exist of cooperating or snitching criminal defendants pleading guilty before being fully trial-ready, for instance without formal discovery, including with the recent early guilty plea of former Trump campaign aide Rick Gates. That cooperating/snitching avenue should not be selected lightly, but the harsh federal felony sentencing system and high percentage of federal felony convictions breeds cooperation/snitching even in plenty of criminal defendants who would otherwise abhor doing so, and plenty of more serious state-level felony prosecutions breed cooperation/snitching as well.

In 1978, eighteen-year old Roy L. Watford, III, entered a guilty plea in the Portsmouth, Virginia, Circuit Court, to gang-raping a twelve-year-old female from his neighborhood. He received a ten-year suspended prison sentence with ten years of that suspended, which is enough to make one suspect that the prosecutor saw the case against Watford as weak, but gladly accepted his guilty plea nonetheless. Decades later, after DNA testing only showed the DNA of one of three men who allegedly gang-raped the victim, Watford testified that he only entered a guilty plea because his “grandfather prevailed on him to plead guilty and go home that day.” Watford v. Virginia, ___ Va. ___ (March 1, 2018).

See here for part two of two of this article.

Fairfax criminal lawyer Jonathan L. Katz pursues the best defense for his clients charged with felonies, misdemeanors and DUI offenses. To schedule a confidential appointment with Jon, please call his staff at 703-383-1100.