Breasts must not be criminalized says Fairfax sex lawyer 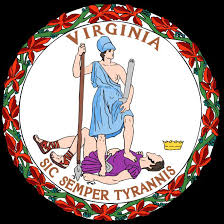 Breasts must be criminalized, but too often they are

Breasts are found on every human. As a Fairfax criminal lawyer, I know that it is common throughout the United States to criminalize fully baring female breasts other than for breast feeding. New Hampshire v. Lilley, 2019 WL 493721 (N.H., Feb. 8, 2019).

The sky has not fallen in American jurisdictions that allow women to bare their breasts, nor in overseas societies that have for centuries permitted such public displays, including in France and Italy, where I delighted as a high school and college student experiencing the widespread female toplessness at the Riviera beaches, and where gawking American teens raised more attention of the locals than the bared breasts. Women should not be statutorily victimized by male arousal over seeing their publicly bared breasts any more than they should be statutorily victimized for male arousal over seeing their legs, face, lips and hair.

Virginia’s seal fully bares one breast, but a woman posing in the same fashion gets arrested

Congratulations to Michelle Renay Sutherland for appearing on February 18, 2019, as Virtus — the woman with a fully-bared breast in the Virginia state seal — while demonstrating in Richmond for Virginia’s passage of the long-stalled Equal Rights Amendment to the United States Constitution.

While it is deeply disappointing that Ms. Sutherland’s judge initially held her in pretrial detention without bond in her pending indecent exposure prosecution — later saying he did not know whether she was simply a public breast flasher (and so what if she was, legally speaking?) — but released her pretrial upon learning that she had exposed her breast as part of a political demonstration. Virginia v. Sutherland, Richmond-John Marshall Criminal/Traffic General District Court Crim. No. GC19007449-00 (next court date March 21, 2019).

Virginia’s indecent exposure statute under which Ms. Sutherland is being prosecuted — Va. Code § 18.2-387 — criminalizes a public “obscene display or exposure of [one’s] person, or the private parts thereof”, but does not specifically identify baring breasts as being a criminal act. However, I anticipate that the trial court will conclude that the indecent exposure statute bans female toplessness, based on the statute’s express exclusion from prosecution of bared breasts for breast feeding, together with the Virginia Court of Appeals’ affirming a buttocks-baring conviction through referencing the statutory definition of nudity, which includes the “female breast with less than a fully opaque covering of any portion thereof below the top of the nipple” in affirming an indecent exposure conviction for exposing a bare buttocks, where the buttocks is only referenced in the nudity definition. Hart v. Virginia, 18 Va.App. 77, 79 (1994).

Sutherland’s criminal defense lawyer is David Baugh, an African American lawyer who pursued Constitutional principles in defending against a cross burning prosecution that went to the United States Supreme Court. I foresee David’s remaining as Sutherland’s lawyer through the appellate process (if she is convicted of indecent exposure in District Court and also on appeal in Circuit Court), and anticipate he will include arguing at the trial and appellate stage that the Fourteenth Amendment to the United States Constitution bars criminalizing the exposure of the female but not the male breast. That argument has not won in many courts, including the Fourth Circuit, but a federal Colorado trial judge in 2017 went the other direction.

Fairfax criminal lawyer Jonathan L. Katz has successfully defended thousands of people accused of alleged felonies, misdemeanors, DUI/DWI, drug and marijuana crimes. Jon Katz is available to discuss your case with you, through a confidential consultation scheduled through his staff at 703-383-1100.