Demonstrators have rights that police & government must protect 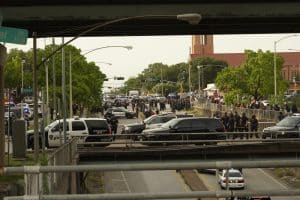 Demonstrators have rights that police & government must protect

Demonstrators nationwide are hitting the streets demanding real policing reform, ending racism, and justice reform after George Floyd died while a Minneapolis police officer pinned him down for over eight minutes with the cop’s knee. As a Fairfax criminal lawyer, I have been unable to keep up with the multiple news stories and discussion by people I know on the one hand of peaceful protesters, suppression of them (and of some journalists as well) starting with curfews, some police even joining the demonstrators or taking a knee in support of Mr. Floyd, and peaceful protesters responding to those nearby them who are committing crimes; on another hand people assaulting police, rioting, looting, vandalism and arson; and on another hand a wide range of government and police action and response that includes excessive action to say the least, and use of the National Guard in some places, and Donald Trump’s threats of calling in the military. Not having been able to keep up with all this news, I limit this article some specific circumstances happening in Northern Virginia and the nation’s capital, and to the need for the police and government reaction to demonstrations not to turn into instances of more police abuse.

Northern Virginia courthouse closes during demonstrations; vigils and protests in the northern part of the commonwealth

As a Northern Virginia criminal lawyer, I am geographically distanced from most of the demonstrations in the commonwealth — in Richmond — and boundary-distanced from all the activity in the nation’s capital twenty miles away, where I witnessed no demonstrations when there this past Saturday early evening for carryout food in a neighborhood that since early this week has seen plenty of protest activity. I have participated in several demonstrations over the years, and see a challenge for peaceful demonstrators who are nearby people who cause property destruction and even assault police.

On June 1, the Chief Judge of the Prince William County, Virginia, Circuit Court announced to county bar members: “In anticipation of a potentially violent demonstration in the City of Manassas this afternoon, and with the recommendation of the Sheriff, I have ordered the Prince William County Judicial Center and all clerks’ offices to close for the remainder of the day effective immediately.” The day before — according to the Manassas City police spokesperson, as reported by Potomac Local News — activity started with peaceful demonstrators, but then new people appeared, with some smashing business windows and throwing objects at police.

Until June 1, Arlington, Virginia, police had been providing police in the nation’s capital as part of a mutual aid agreement with the United States Park Police while demonstrators raise their voices. The Arlington government ended that practice after the president did a photo opportunity at damaged St. John’s Church (where I used to attend French-language conversation gatherings) across the street only moments after police forcefully cleared adjacent Lafayette Park, with reports of rubber bullets and teargas (although park police claims it was smoke canisters rather than teargas).

Local Episcopal rector Gini Gerbasi reported the following police abuse that counteracts federal government that Trump’s photo op was not coordinated with the clearing of the area while demonstrators were present: “The police in their riot gear were literally walking onto the St. John’s, Lafayette Square patio with these metal shields, pushing people off the patio and driving them back… We were literally DRIVEN OFF of the St. John’s, Lafayette Square patio with tear gas and concussion grenades and police in full riot gear. We were pushed back 20 feet, and then eventually – with SO MANY concussion grenades – back to K Street.”

What demonstrators need to know about dealing with police, arrests and defense against prosecutions

Demonstrators need to know that the First Amendment does not shield you against committing criminal activity. Furthermore, beware dragnet arrests where police arrest more than anyone witnessed committing vandalism or other crimes. Finally beware converting yourself from an innocent detainee or arrestee by avoiding exposing yourself to being prosecuted for assaulting police, disorderly conduct, obstruction of justice or resisting arrest.

It is ideal for demonstrators to consult with a qualified lawyer before demonstrating, but not mandatory. Your  right to demonstrate is vital.