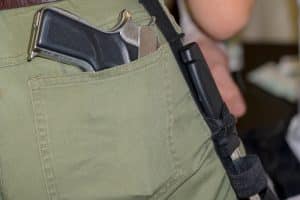 “Turnaround” is a police command that amounts to a seizure when the suspect does not depart, says Fairfax criminal defense lawyer

“Turnaround,” and “stop” are police commands that mean “no reasonable person would have believed he or she was free to leave.” As a Fairfax criminal defense lawyer, I know that such a cop command thereby amounts to a Fourth Amendment seizure of the suspect unless s/he departs after the police order is made.

While monitoring a Virginia public housing complex, a police officer saw Tyron Johnson walk through its courtyard. When Johnson emerged onto the sidewalk, the cop parked, got out of his car, and called out “Yo bossman.” Johnson looked towards the police officer, dropped and picked up his jacket and continued walking down the sidewalk. As Johnson retrieved his jacket, the police officer saw a bulge in Johnson’s waistband under his shirt. Johnson v. Virginia, Record No. 1799-19-2 (Va. App. April 28, 2020) (unpublished). See below for the cop’s subsequent turnaround command.

“Yo, turnaround” amounted to a police seizure under the Fourth Amendment, says the Virginia Court of Appeals

The officer then said, “Yo, turnaround, you live here?” and Johnson replied “yes”. Did these two “yo’s” result from a law enforcement fascination with Rocky, or with yo-yo’s? Regardless, this week, the Virginia Court of Appeals concluded in Johnson that: “Considering the totality of these circumstances, no reasonable person would have believed he or she was free to leave. Accordingly, we hold that Johnson was seized for the purposes of the application of the Fourth Amendment when Johnson complied after Officer Harris called out, ‘Yo, turnaround, you live here?’ as three uniformed police officers exited their marked police vehicle and walked toward him.” Johnson.

In Virginia, reasonable suspicion to believe a person is armed with a firearm by itself does not permit a stop nor search

Johnson refuses to let the commonwealth add a new argument on appeal that it did not make in the trial court, which is that the police officer’s lifting up Johnson’s shirt — after ordering him to turnaround — was a frisk (requiring reasonable articulable suspicion) rather than a search (requiring probable cause), and declines to decide whether the shirt lifting was not a frisk or search.

Instead, the Court of Appeals concludes the police — after ordering Johnson to turnaround — did not have any lawful grounds to lift up Johnson’s shirt, whether as a frisk or a search, underlining: “An individual has a fundamental constitutional right under the Second Amendment to bear arms, and the exercise of that right cannot, without more, establish probable cause for either a search or a seizure under the Fourth Amendment. Therefore, the presence of a bulge under a shirt suggesting one is armed is not automatically indicative of criminal activity. See McDonald v. City of Chicago, 561 U.S. 742, 791 (2010) (incorporating the Second Amendment’s individual right to bear arms in the Due Process Clause of the Fourteenth Amendment); District of Columbia v. Heller, 554 U.S. 570, 635 (2008).” Johnson.

Adding Virginia law to the mix, after analyzing the police seizure in telling Johnson to turnaround, Johnson further states: “The Commonwealth, like many other states, authorizes individuals to carry a concealed firearm so long as he or she has ‘a valid concealed handgun permit.’ Code § 18.2-308. But “[t]he very enumeration of the right [to bear arms] takes out of the hands of government—even the Third Branch of Government—the power to decide on a case-by-case basis whether the right is really worth insisting upon.” Heller, 554 U.S. at 634. An individual’s choice to exercise his fundamental right to bear arms cannot, standing alone, serve as the basis for reasonable suspicion or probable cause that in doing so, he is committing a crime. Thus, we do not presume that an individual carrying a concealed firearm must be in violation of the law in doing so. If there are other indicia of criminality present, the presence of a bulge consistent with a weapon can be considered under the totality of the circumstances in determining whether reasonable suspicion or probable cause exist.”