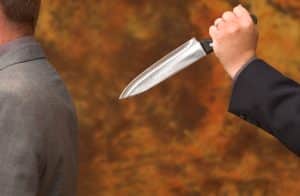 Enemies & obstacles are to be transcended – Fairfax criminal lawyer tells how

Enemies are obstacles that are found in abundance if a criminal defense lawyer wants to find them. However, as a Fairfax criminal attorney, I know that acquittals and other court victories are obtained by not getting bogged down by seeming enemies nor by apparently insurmountable obstacles. While it is vital to be realistic about our strengths, weaknesses (and overcoming them), and challenges, our own worst enemy often is ourselves.

Before becoming a lawyer, I regularly found enemies, tyrants and thorns in the sides of humanity. They can be real, with examples as brutally extreme as Kim Jung Un, Hitler, Stalin and their tyrannical successors; and with corporations that amorally prop up any dictatorship that will help guarantee their profits, destroy the environment, and overwork and underpay their assembly line employees abroad.

At the right time, early in my criminal defense lawyer career, the great trial lawyer SunWolf shared with me her beautifully hand-art business card proclaiming that reality is no obstacle, and thus no enemies. As a criminal defense lawyer and human, I have a choice to get bogged down daily with all the inhumanity and seemingly unfeeling indifference that infests the planet, or to find the possibilities in pursuing victory as a warrior, taking inspiration from Russell Crowe’s gladiator character whose team conquers the other side that has the brutal advantage of swinging a mace at the gladiator’s compatriots’ faces as they emerge from their holding pit. As I have said before, the best courtroom battle is with the glee of a martial artist practicing his art in the snow.

Insist on replacing the wrong judges, prosecutors and police, while recognizing when they are the criminal defense lawyer’s judge, prosecutor or cop for the day

As a Fairfax criminal lawyer, I know that there is truth to the Serenity Prayer (possibly mis-attributed to Reinhold Neibuhr): “God grant me the serenity to accept the things I cannot change, courage to change the things I can, and wisdom to know the difference.” Yes, criminal defense lawyers have unique knowledge and perspective to identify judges, prosecutors and police and seeming enemies who need replacing or reforming, but on the trial date, a lawyer generally is stuck with the judge, prosecutor and police assigned to the lawyer’s case.

Recently, I had a challenging Virginia felony matter scheduled where the assigned prosecutor was known for being one of the most challenging for getting any kind of good plea deal from. I had nothing to lose and everything to gain by seeking a favorable settlement with this prosecutor, so I proceeded to provide him documentation of the positive steps my client had taken since the incident date from several months earlier, and to illustrate how a conviction for the felony count could have a very serious adverse impact on his career. Before even speaking with the prosecutor, I spoke with the case’s police officer and learned that the cop did not have any strong interest in a harsh case outcome and had already spoken with the prosecutor. Without skipping a beat, the prosecutor made me a better plea offer (career- and reputation-friendly, without active jail time) than I had proposed to him.

Had I approached the prosecutor expecting feces, I more likely would have received feces because my manner would have exuded feces. Criminal defense lawyers must leave the feces in the bathroom, and move forward towards victory.