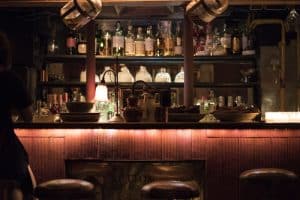 As a Fairfax DUI lawyer and one who has consumed alcohol and been around plenty of people drinking liquor during holidays and other times, I know that alcohol in moderation can be enjoyable, but that beer, wine and liquor also are widely misused and abused substances that when overused can bring out the worst in many people. Alcohol’s dangers do not justify the draconian criminal laws against DWI, and especially oppose Utah’s recent descent from a 0.08 blood alcohol limit for DUI cases down to 0.05.

As a Fairfax DUI attorney, I know that few people will be convicted for DUI if they avoid driving a vehicle within twenty-four hours of consuming alcohol, and also waiting until the effects of any driving-affecting medicine have worn off, whether during holidays or other times. In this day and age of Uber, Lyft, hotels and Airbnb, it is easier than ever to refrain from getting behind the wheel when unsafe to do so.

Avoiding public intoxication convictions can take significant effort for drinkers who do not stay at home to drink, because such arrests can even be made for allegedly being drunk in a bar. Worse, Virginia’s Supreme Court long ago okayed the following ridiculously watered-down statutory definition of intoxication that is also in the Virginia pattern criminal jury instructions: “‘Intoxicated’ means a condition in which a person has drunk enough alcoholic beverages to observably affect his manner, disposition, speech, muscular movement, general appearance or behavior.” Va. Code § 4.1-100. Therefore, exceeding one drink per hour in public can be risky (defining one drink as a twelve-ounce beer, four-ounce wine, or one-ounce of liquor). During holidays, police are all the more vigilant for DUI arrests.

Walk into the Fairfax County and other Virginia courthouses any day, and one will find DWI as among the most common jailable prosecutions. How does a DWI suspect and defendant reduce the risk of conviction from behavior during holidays and beyond? On the scene and beyond, this means knowing the benefits of remaining silent and refusing field sobriety tests and the voluntary handheld breath test (versus the mandatory post-arrest breath or blood test).

A DUI arrest necessitates obtaining a qualified lawyer who will obtain essential evidence, discovery and any incident video; and who will fully pursue all possibly beneficial defenses. With that lawyer, the DUI defendant can also address ways to reduce the risks of an adverse outcomes, including preparing for case negotiations and any possible sentencing in the event an acquittal or case dismissal is not accomplished.

The winter holidays can be enjoyed in so many ways, including enjoying alcohol in moderation. Following the tips in this article and elsewhere on this blog can help assure enjoying the holidays without adding angst over alcohol-related arrests and prosecutions.

Fairfax DUI lawyer Jonathan L. Katz pursues your best defense against DUI, DWI, felony, misdemeanor & drug prosecutions. Jon Katz will be delighted to discuss your case with you, through a confidential consultation scheduled through his staff at 703-383-1100.