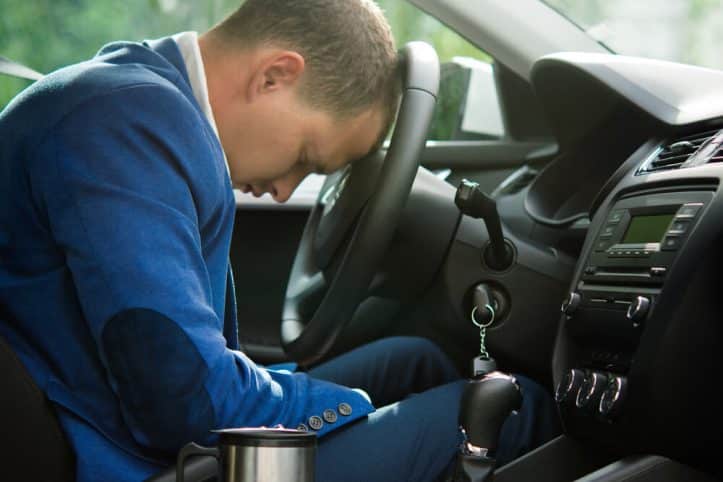 Sleeping while allegedly impaired can lead to police charges of violating the Virginia DUI law. As a Fairfax DWI lawyer, I would prefer that my clients not fall asleep behind the wheel. If they do, I prefer that they do so when their car is completely off, with no key in the ignition, and with the gear in park. As with all my Virginia clients charged with driving while impaired by alcohol and/or drugs, I cheer when they decline to answer police questions, decline searches, and decline field sobriety tests and the roadside handheld preliminary breath test.

Although significant consumption of beer, wine or alcohol can accelerate drowsiness and sleepiness, many other factors can also do the same, whether or not the person has also consumed alcohol. Those factors can include normal and abnormal sleep cycle, individual short term and long term physical health, illness, insomnia, long drives, mental stress, and physical exhaustion from work, sports or any number of other factors. Consequently, sleeping after consuming alcohol — even if coupled with less than stellar field sobriety tests (which can be adversely affected by that very sleepiness and drowsiness) — still leaves room for reasonable doubt about guilt, and therefore insufficient information by itself to convict for violating the Virginia DUI statute.

What if I fall asleep while blocking traffic and with my car in drive?

Avoid needing to answer the foregoing question by only stopping your car in a lawful parking place, and beware doing that at a shopping center, where shopping center security and police love checking on people asleep behind the wheel. Ideally, avoid being found asleep behind the wheel in the first place, at least if you have recently consumed alcohol. Avoid doing anything to freak out a Virginia judge or jury about what safety disaster might have happened by your sleeping with your gear in drive and/or while blocking traffic, had the police not shown up when they did.

What if it takes a long time for police to wake me up from sleeping?

We have all experienced very deep sleep even when neither alcohol nor drugs are in our bloodstream. Nonetheless, if it takes police a long time to awake a sleeping person in the driver’s seat of a running vehicle or a vehicle not lawfully parked, law enforcement will make a big deal of it, including going into minutiae about such techniques as a sternum rub for working to wake up the suspect. People react with their guts, which means that some jurors are willing to acquit a Virginia criminal defendant whom the jury thinks was only caught in an aberration and has paid his or her sufficient dues (even if those dues are as little as having had to hire a lawyer). The more unsettling is the combination of consuming alcohol and one’s behavior while asleep behind the wheel, the more unsettled the judge or jury may feel about acquitting, even if finding guilt goes against their obligation to acquit if unable to find guilt beyond a reasonable doubt.

What should I do if exhausted and about to get behind the wheel?

If you are exhausted, do not get behind the wheel of a car, whether or not you will soon be sleeping behind the wheel. Such behavior risks a car accident and a criminal charge of reckless driving at the very least. If the weather is inclement and your motor vehicle is your only shelter form such weather, choose to sit in the passenger seat rather than the driver seat, and still beware engaging the ignition, running any mechanical operations of the car (including the heating and air conditioning and radio), or having the key in the ignition. Even if you are in the passenger seat, if you are the sole occupant of the car, you risk being fingered as the driver or attempted driver. Be aware that the Virginia definition of impaired driving — at least where breath testing data does not exist —  is found in  case law that waters down the definition of intoxicated to having consumed enough alcohol to noticeably affect one’s appearance or behavior.

What if the police characterize me as unconscious?

Police are often fond of saying — at least when supported by the evidence — that a sleeping Virginia DUI suspect was slumped over the wheel and unconscious. It is preferable that people asleep in their car not be slumped over and not looking any more affected by alcohol than you would if asleep on a very long trans-Pacific air flight. Of course, law enforcement does not know if a person behind the wheel is unconscious versus simply asleep. Through good cross-examination, a Virginia DUI lawyer can turn around the narrative to having the police officer parrot back the “asleep” rather than “unconscious” characterization of the defendant, and can be asked to confirm the time of the incident, if a time when most people are asleep, because nothing is abnormal about doing what most people do.

What should I do if arrested for allegedly violating the Virginia DUI lawyer?

If you are arrested for alleged DUI, it is time for you timely to obtain a qualified lawyer to defend you against such a damning accusation that risks numerous undesirable fallouts in the event of a conviction. Fairfax DUI lawyer Jonathan Katz has successfully defended hundreds of DWI defendants, and will be delighted to defend you. Call 703-383-1100 to schedule a free, in-person consultation with Jon Katz about your court-pending case. On top of all that, avoid any additional DUI and criminal charges, particularly while your first case is pending in court.