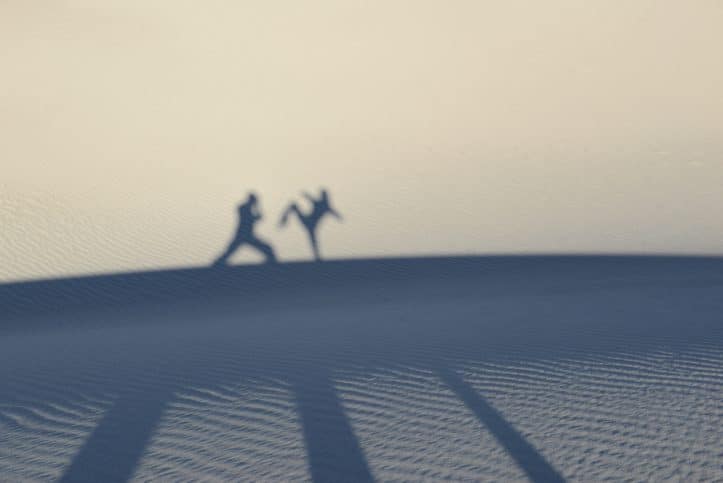 Virginia self defense law (“SDL“) provides an option for a criminal defendant to seek an acquittal, but SDL does not work when the danger of assault or worse is not imminent. As a Fairfax criminal lawyer, I know the challenge for an assault or homicide defendant to get up on the witness stand and to explain why his or her actions were legally justified by the awful choice between imminent physical danger to the defendant or their loved one or other person, or using physical force as the only apparent way to avoid immediate injury. What is one to do, then, if s/he is terrified about living with a violently unstable person and not knowing when that person will strike next? Virginia law does not permit a pre-emptive strike against that person. Randolph Eugene Smith v. Commonwealth of Virginia, Record No. 0523-21-2 (Va. App., March 1, 2022).

Batman — a work of fiction in the first place — was a vigilante, but got away from any prosecution — let alone a successful one — because he had police approval for his independent crime fighting ways. In real life, the Virginia self defense law and police do not tolerate vigilantes. Randolph Eugene Smith painted a picture of a volatile and violent stepson Neal Matthew Waters to the point that he was scared for the safety of Smith and his wife. The morning that Smith killed Waters with a 12-gauge pump action shotgun, Waters had gone violently berserk, pushing Smith’s wife, and waving a chef’s knife while threatening to cut Smith from ear to ear. No matter how unnerving such a heart-pounding scenario may have  been, the Virginia Court of Appeals affirmed Smith’s conviction for first degree murder and use of a firearm in the commission of a felony, in the light of Smith’s combined actions of having the opportunity to retreat, grab his shotgun, and call the police, together with firing four shots into Waters rather than stopping once Waters was disabled. Smith.

Keep your mouth shut when an actual or possible criminal suspect

How many criminal suspects forego their right to remain silent with the police out of the mistaken belief that their right not to talk with the cops only arises once they are arrested or Mirandized, because they do not know that their silence cannot be used against them at least so long as they clearly assert their right to remain silent, and as long as the trial judge concludes that the suspect sufficiently asserted his or her right to remain silent; to avoid a night or more in jail (and/or in a desperate attempt to see their children one more time); in the hope that talking will strengthen their defense in cour; or in the hope of avoiding finding and paying a criminal defense lawyer? Regardless of a criminal suspect’s reasons for speaking with police, doing so without the presence and advice of a qualified lawyer is suicidal, including when Virginia self defense is claimed. Doing so is more foolhardy than an amateur doing trapeze stunts without a safety net.

What did Randolph Smith tell the police to help convict himself of murder?

Take your pick of the most self-damning statements that Virginia self defense claimant Smith made to the police when they arrived in response to his 911 call that he only made after first calling and texting his wife.  (1) Initially, Smith told the cops that he did not know why he shot Waters rather than first calling the police. (2) Smith changed that to saying Waters had threatened harm to Waters and his wife for ever reporting him to the police. (3) Smith did not leave the house (which his wife had accomplished at least minutes earlier), because Smith did not feel he should have had to leave his own house and wait for Waters to cut his throat or damage Smith’s house on a later date. (4) Smith did not shoot Waters to disable him from stabbing Smith, but to “‘stop a deadly force… enough is enough.'” Smith. Smith’s tongue wagging with the police gave his Virginia criminal defense lawyer an unenviable challenge at trial.

When the threat is not imminent, a Virginia self defense claim fails

“’In order to establish self-defense, a defendant must show that he… “reasonably believed that [he] was in danger of serious bodily harm or death.'”‘ Id…. ‘A defendant must also demonstrate “that he was in imminent danger of harm” by showing “an overt act or other circumstance that affords an immediate threat to safety.”‘” Smith.  Smith’s Virginia self defense claim was weakened by his ability to physically retreat from Waters’s knife threat, and was decimated by Smith’s multiple gunshots meant not to disable Waters for the moment, but for life.

If I do not take decisive action now against a violence-threatening person, will I have to spend the rest of my life watching over my shoulder and sleeping with one eye open?

If Smith’s claims about Waters’s repeated volatility were true, Smith lived each day in fear of not knowing when the violence would next be inflicted by Waters on him and his wife, at what level of intensity, dangerousness, and lethality. Nonetheless, the Virginia self defense law did not allow Smith to take this matter into his own hands.

Fairfax criminal lawyer Jonathan Katz develops a plan for your best possible defense against Virginia DUI, felony and misdemeanor prosecutions. Jon’s default is to be fully prepared for trial at every turn, thus making settlement negotiations all the stronger, and always being able to present a great defense at trial. Call 703-383-1100 for a free completely confidential initial in-person consultation with Jon Katz about your court-pending case.