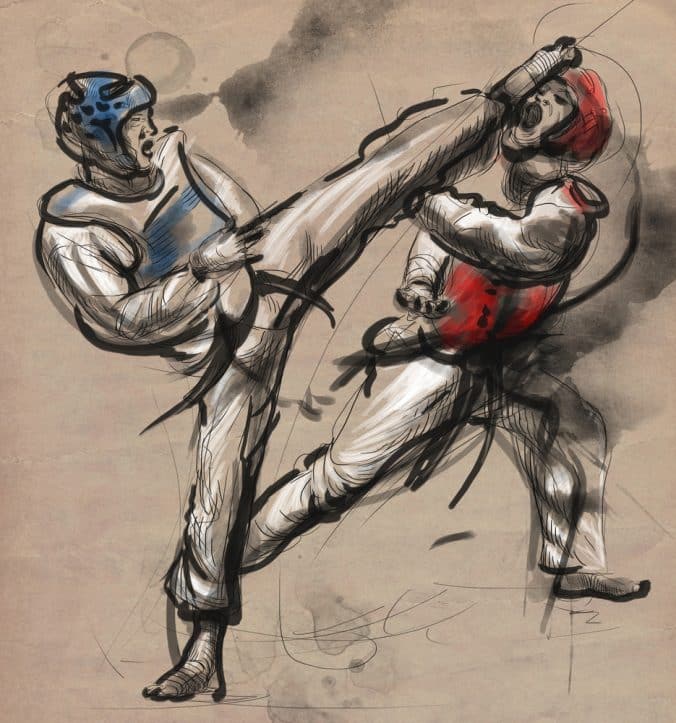 Virginia trials are all-out proverbial war that require being fully armed and knowing how and when to use which weapons, says Fairfax criminal lawyer

Virginia trials are often uneven playing fields with some judges making improvident evidentiary and procedural rulings without giving the defense a fair chance to argue the point, with some prosecutors going against the established Constitutional, procedural and evidence rules –whether intentionally or otherwise — and with police and other prosecution witnesses not being bound to lawyer ethics rules. This state of messy affairs is not for the faint of heart. As a Fairfax criminal lawyer, I relish it as a criminal defense lawyer — with the courtroom being my playground — not because I like the mess, but because I know I can cut through the mess to reverse uneven playing fields, harmonize imbalanced situations, and pursue the best possible path to victory. Who knew that every fistfight, wrestling match, tackle football game and other adversarial physical encounter from my earlier days would prepare me for Virginia trial courtroom battle, with a colleague once describing me as having a thick skin and open heart. I also like the description of my t’ai chi ch’uan / taijiquan martial art by one of the fighting masters as fighting with a ball of cotton containing a brutally sharp needle inside.

Criminal defense lawyers in Virginia trials are most effective when at once maintaining non-anger, compassion, and keeping a persuasively calm exterior while firing the necessary bullets without letting one bullet get past them

I repeatedly talk about the need for a criminal defense lawyer in Virginia trials to simultaneously fight effectively and like hell for as much victory as possible while keeping a persuasively calm exterior. One of my first essential lessons in that vein came when I watched transfixed at the Kung Fu pilot episode with David Carradine, in February 1972, when a third grader. This was not mere Hollywood — and this series was a television breakthrough — but a lesson in doing the foregoing in court, particularly this scene where Kwai Chang Caine keeps his calm composure and even keeps drinking his glass of water as a racist saloon denizen escalates his failed assault attempts from a failed attempts at slugging, hitting over the head with a chair, and stabbing. Such behavior follows straight from Master Kan’s advising to observe the ways of nature and to avoid before checking, check before hurting, hurt before maiming, and maim before killing. That also is the way for a criminal defense lawyer to proceed in court. Likewise, Master Kan counsels “We are required to trust even if we are often reminded of the existence of evil… Deal with evil through strength – but affirm the good in man through trust. In this way we are prepared for evil, but we encourage good.”

Persuasion in court includes communicating what speaks to the judge and juror, and not coming across as angry or as some weird mantra reciter

I can do all of the above in Virginia trials without ever speaking about my martial arts practice nor about Eastern wisdom nor philosophy about ratcheting up levels of aggressiveness depending on the circumstances. All I need to do is to continue working on myself, practice non-anger, never hesitating to inflict as much damage as necessary on prosecutors and opposing police and lay witnesses within the bounds of the law, and relishing knowing I am on the side of the angels for my criminal defense clients, giving them the full court press fight they deserve.

The last thing a criminal defense lawyer should expect in Virginia trials is a minimum standard of correct practice by judges, prosecutors, police and opposing lay witnesses. Being human, all of them are able to do good and to falter below that. Many times I have turned all of them around by simply speaking sense to them without unnecessarily making them lose face nor acting in anger. In recent trials, I have heard a prosecutor unsuccessfully object to my cross examination question of the cop as “asked and answered” when that never applies when the question was only previously asked on direct examination. At one trial, a prosecutor recently unsuccessfully objected to my asking a the cop if a damning word he used about my client’s behavior was anywhere in his police report, where the prosecutor claimed police reports don’t have to be complete. That is apples and oranges. If the word or idea expressed by a copy on direct exam is absent from his report, that is fair game to cross on and to attack how on earth the cop would remember such an item months after the incident if not even in his report. I have even on a recent occasion had a prosecutor object when I argued that a police officer violated my client’s Fifth Amendment right to remain silent, on the basis that Miranda was not yet relevant. I never said that Miranda applied yet, when the Fifth Amendment always applies. If a prosecutor is going to go to trial, s/he better know such basics of the law before the trial ever starts. It is not for me to lecture the prosecutor on that, rather than to calmly and persuasively explain to the judge why my arguments are sound and the prosecutor’s are not. Judges are generalists who handle plenty of non-criminal matters, and a well-prepared persuasive lawyer can credibly persuade a judge that s/he has made an improvident ruling, or is about to do so. And if the judge still rules incorrectly after I have stated the law correctly and as persuasively as possible, I have planted a seed in the judge’s mind to rule in my favor later in the trial or in a subsequent trial. This is why I smile when I object.

No matter how violent it may sound, a Virginia criminal defense lawyer’s role is to kiek ass towards victory

During my first week at law school, I felt discombobulated when a third year law student woke me up to reality that my desire to do ACLU-type civil liberties work competed with the many litigation veterans that this organization prefers going to battle. Then, this lawyer did me the biggest favor, ending our talk with “Kick ass.” Yes, kick ass in criminal trials, in law school and in life. Another third year law student recoiled when I proudly repeated this phrase, and a fellow lawyer at a lawyers’ mindfulness retreat pointed out that she saw the real me as the compassionate person I presented on the last day of the retreat than the “kick ass” description I gave on the first day of the gathering. However, I am both, and both are necessary in Virginia trials for criminal defendants.

Fairfax criminal lawyer Jonathan Katz pursues your best defense against Virginia DUI, felony and misdemeanor trials. Learn the major difference that Jon Katz can make for your defense in Virginia trials by calling 703-383-1100 to schedule a free in-person completely confidential consultation with Jon Katz about your court-pending prosecution.