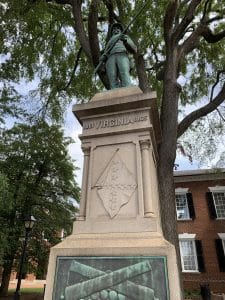 Momentum continues forward for Virginia criminal defendants’ rights with legislation together with removal of some courthouse confederate memorials. As a Fairfax criminal lawyer, I applaud these forward movements and urge that they continue at a good pace. Further strides have been made for the accused in Virginia during the recent Virginia special legislative session and in removing the confederate statue at the Loudoun County courthouse grounds, a judicial decision to remove the Robert E. Lee portrait from the Louisa County circuit courtroom, and the decision to remove the Stonewall Jackson statue and confederate memorial statue from the Albermarle County courthouse grounds.

What are the updates from the Virginia special legislative session?

Virginia Legislative momentum is progressing with barring searches based only on marijuana odor, narrowing the ability for police to make pretextual traffic stops to pursue jail-able arrests, letting criminal defendants opt to decline having jurors involved with any sentencing, and ending mandatory minimum sentencing for assaulting law enforcement officers.

How did a lawyer convince a Virginia judge to reverse his initial refusal to remove Robert E. Lee’s decades-long-hung portrait from his courtroom?

Praised be Richmond lawyer and former capital defender Douglas Ramseur for never giving up nor giving in on his successful momentum to remove Robert E. Lee’s portrait that for over a century faced jurors in the Louisa County, Virginia courthouse. I have been to that courtroom, and was immediately disturbed by the display of that portrait, which runs counter to the need for jurors and jurists to have race and ethnicity play no role in assessing evidence, deciding cases, and handling sentencing.

I was stunned that in originally refusing to remove the Lee portrait from his courtroom, the trial judge in my view ran counter to separation of powers considerations by deferring to the county board of supervisors on the matter and also noting that Lee was honored by the annual relic  [Robert E.] Lee-[Stonewall] Jackson day. When I posted about his refusal on social media, Doug responded that his effort was not over for momentum to remove the portrait. Praised be Doug “The Ram” Ramseur for continuing to pursue his effort to remove that Lee portrait as part of his defense of a murder defendant with a still-pending trial in that county. This past week, the judge ordered the Lee portrait removed, and in explaining his reasoning pointed out that the county board of supervisors had not weighed in on the matter subsequent to the judge’s original ruling, and legislation has [too late but finally] eliminated Lee-Jackson day.

Ramseur said that “Lee had no particular connection to Louisa County or to its legal system,“ yet his portrait has been displayed in a place of honor in the courtroom for 112 years. We presented evidence that the portrait was chosen intentionally by individuals who sought to promote white racial superiority and to intimidate Black citizens.” Thank you to Doug for keeping this momentum going.

This year, Virginia legislation took effect that allows the removal of war memorials from government property, including courthouses. No longer can government officials hide behind the now-defunct statute that barred such removal, to slow any momentum to remove confederate memorials from courthouse grounds. Already, the confederate soldier statute has been removed from the Loudoun courthouse grounds, and at the Albemarle courthouse grounds, the confederate soldier statue was removed on September 12, and the nearby Stonewall Jackson statue on said grounds and the Robert E. Lee statue three blocks away (that was the unite the right 2017 flashpoint) will be removed once litigation on the matter is won.

Does change in the law change judges’ and jurors’ attitudes?

Criminal defendant-friendly changes in law does not automatically change judges’ and jurors’ attitudes. Consequently, not only do we need to keep the momentum going with systemic changes through legislative change and removing confederate memorials from courthouse grounds, but we always need criminal defense lawyers pursuing the best defense for defendants.